At the University of Iowa, our six adult hospitalist teams share one dedicated nursing unit, and otherwise have patients spread throughout the hospital. At certain times, a team might have patients in over eight different units, with significant distance between units. Often times, teams have only one patient in a given unit, leading to significant frustration. Other institutions have also had similar problems that they have addressed in various ways. Some hospitals have created dedicated adult hospitalist nursing units, while others have tried algorithmic approaches to improve the localization of patients.

Having patients in fewer units provides many benefits, namely allowing for interdisciplinary rounding and increasing familiarity between unit staff and physician teams. Moreover, physician staff report higher levels of satisfaction with their work. On the other hand, a recent study at a similarly large academic medical center showed that there may be unintended consequences of localization of adult hospitalist patients, as they found increased length of stay and increased diagnostic testing after localizing a subset of their staff to a single nursing unit (Singh 2014).

Previously at Iowa, we had attempted to decrease the average number of units by assigning “preferred” units to each adult hospitalist team (Figure 1). However, we found that there was not enough flexibility in the admissions system to allow for “preferred” units without a delay in patient admission that we did not want.

With this background in mind, at Iowa, we decided to aim to decrease the number of singleton units - defined as nursing units where a team had a single patient. A secondary aim would be to decrease the average number of units per team. After exploring possible interventions, we settled on one that we found feasible and had potential. We created a new protocol for how triage officers would designate patients already with a bed assignment to teams (Figure 1). This involved a significant proportion of patients, and did not involve significant costs in time or resources.

We collected data with automated reports from the electronic medical record. Baseline data was collected for 16 weeks before implementation and compared with post-intervention data collected for 5 weeks. Secondary measures included total number of units per provider team, and average length of stay for all patients in medicine services. Survey data was also collected from participants to assess compliance with the protocol. We then used Microsoft Excel with descriptive statistics to describe the baseline characteristics of the hospitalist teams, before applying the same methods to our final data to describe our end results. 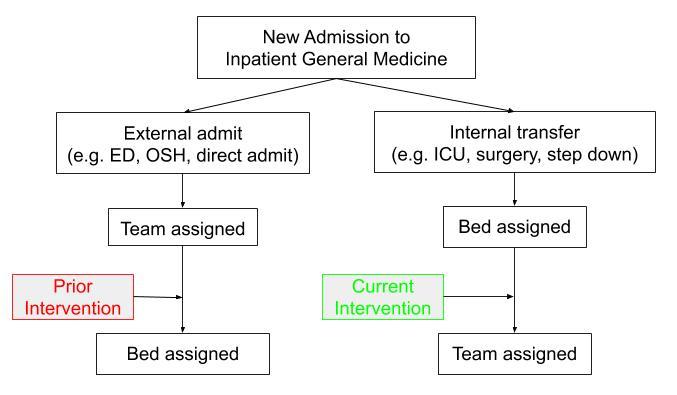 The average total number of singleton units for all teams each week was not significantly different before and at 5 weeks of the intervention (115 vs 122.4, p = 0.44). Other metrics including average LOS, average daily number of nursing units per team, or average daily census between the baseline and intervention data, were not significantly different. Qualitative survey of participants reflected poor compliance with the new protocol, which explains the lack of effect of the intervention.

Figure 2. Total singleton units for all teams by week, including baseline data

After 5 weeks of intervention, we saw no significant decrease in the average number of singleton units. There were many limitations to our intervention, including the number of patient transfers affected (<50% of total medicine patients), short period of the intervention (5 weeks), subjectively poor compliance with new protocol, and difficulty in modifying team assignments (e.g. hospital at capacity, census balancing, teaching vs nonteaching patient, call schedule).

Localizing bed assignments for a team is a moving target that is influenced by multiple factors. We have considered two main players with our study: the Admissions and Transfer Center staff and the Adult Hospitalist Program triage officers. However, there are many other variables that we have yet to explore, such as other types of admissions/transfers to the teams, and weekly reassignment (done on Thursdays in conjunction with new attendings on staff).

Moving forward, we are looking at increasing compliance with the protocol, such as with visuals placed by computer stations and face-to-face meetings to discuss any concerns or challenges. Other options also include changing the approach entirely, such as by using technology and communications (local telemedicine) or creating some standard protocol to decide when to visit a patient.

We would like to thank the Society of Hospital Medicine for their support through their Student Hospitalist Scholar Grant. Also, thanks to Evelyn Perry, the Adult Hospitalist Group Triage Officers, and the ATC staff.